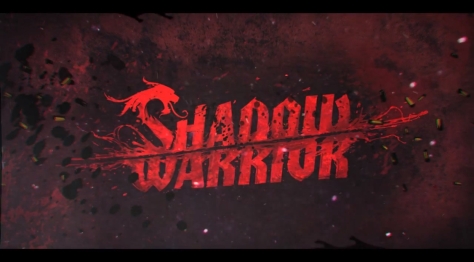 Who wants some Wang?

That’s the question we are being asked again by Flying Wild Hog with this reboot to the classic Shadow Warrior franchise. For those not familiar with the series, Shadow Warrior is an fps originally dreamt up by 3D realms, the same guys who brought the macho misogynistic Duke Nukem kicking and screaming into the world. Instead of Alien ass kicking and misogyny, with Wang we are dealt Demon slicing and borderline racism.

Much like Duke, Wang would quip his way through incredibly violent missions. If you have never played the original Shadow Warrior, I implore you to do so. It was one of my favorites as I grew up arriving a bit later than Duke Nukem 3D but using exactly the same BUILD engine. If you have a steam account then you can pick up the original for the amazing price of absolutely nothing, if you enjoy it, you can get the complete package with all of the add on packs for just £6.99.

Now, many of you will be wondering why you should even care about Shadow Warrior. After all Duke Nukem Forever pretty much killed the Duke Nukem franchise. Well, Shadow Warrior is a bit different because it was picked up by a rather capable young studio, whose previous endeavor Hard Reset was a very promising first attempt at a fps. Also, Shadow Warrior wasn’t in development for decades, being rebuilt time and time again using newer game engines, only to be rushed out at the last minute because the studio was bankrupt.

As a result, Shadow Warrior feels like the game Duke Nukem Forever should have been. The graphics are very impressive, and the reflections on polished surfaces makes smothering them in blood even more satisfying. At times the sheer amount of visceral gore flying around the screen is like watching Leatherface skipping merrily through an abattoir leaving a monsoon of blood and guts in his wake.

Gameplay is fast, brutal and at times very hard, as a twitch shooter though, there is a huge amount of depth. Players are given the opportunity to build up Wang’s abilities and improve his arsenal using Karma Points, Money or Ki Crystals that are found or earned from slicing and dicing demons in a particularly stylish way.

Guns get upgrades such as the ability to dual wield SMG’s, or even transform the shotgun into a quad barrel one that tears apart smaller demons like a starving tramp would tear apart a roast chicken. The weapons are all incredibly varied but it’s the Katana where Shadow Warrior really shines. An interesting alternative to Doom’s Chainsaw and Duke’s Fists in the original, the Katana used to be the last resort when ammo was depleted. In Lo Wang’s latest excursion, the Katana is the most satisfying weapon to use. Walking up a narrow stone path with a death-inducing drop either side, I had the most fun I have had in a game recently, chopping up a procession of Monsters, like a maniacal Chef creating a conveyor belt of Demonic Sushi. Lopping off limbs of monsters isn’t just visually rewarding, it also affect the demon’s ability to attack so by taking away the arm that carries his weapon you also seriously hinder their ability to do damage to Wang.

The Karma Points and Ki Crystals are where things get really interesting, bestowing upon Wang the ability to deal more devastating sword blows, the ability to block and repel damage and heal himself. I have to admit to being disappointed by the ability to self heal at first as I feel that the health regeneration mechanic is heavily over used in today’s fps genre, after COD popularised the technique having stolen it from Halo. COD’s and their subsequent copycats, use of a rechargeable health system in a supposedly ‘life-like’ setting where soldiers are able to ‘will’ gun shot wounds better is baffling. Its no wonder most Americans think that the Obama Care program is redundant when most of them spend the majority of their time plugged into Activision’s shooter online, vomiting a verbal tidal wave of hate and homophobia into their headsets.

In Shadow Warrior, Wang doesn’t auto heal, you have to heal him yourself using a basic button combo. It actually becomes a skill to learn when to quickly heal up and for how long in the middle of a firefight. Sometimes there will be so much carnage and mayhem on screen it is very easy to miss how low your health is, and before you realise Lo Wang has received anything more than a flesh wound, you’ll find yourself being tea bagged by the AI. As the game isn’t exactly pretending to be realistic, with fornicating bunny rabbits that turn demonic and attack should you kill enough of them, and the way the health regeneration is implemented, I actually see no fault with it being used in Shadow Warrior. 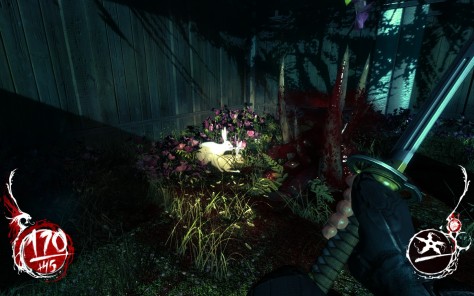 The use of the button combo’s on the mouse to deal different attacks sword and magical attacks results in no two confrontations being the same. You can build up your magical shielding and slowly wade your way through demons hacking at them like an explorer would hack his way through the jungle. Or you can just use your powers throw monsters into the air and treat them like a Demon Pigeon shoot. There is also a move that can only be described as a Star Wars style force push that shoves enemies backwards. I cannot help but wonder what kind of amazing game Flying Wild Hog would create should they be given the Star Wars license. Maybe Disney might want to get in touch with them for the official licensed game of the new movie that will inevitably be released. Flying Wild Hog have more than proved they can turn out a quality title in a short period of time, and if you replace Lo Wang with a Jedi, the Katana with a Light Sabre and his Chi with the Force, then you’ve got yourself one of the most enjoyable FPS Star Wars titles for some time.

The story, whilst not a knee deep four disc Final Fantasy affair, has enough meat to keep players interested. Demons are trying to cause some trouble with an ancient sword so Lo Wang must set out and assemble the sword before they can with the help of a Rabbit masked demon called Hoji. Everyone’s motives are slowly revealed through the use of cut scenes and banter between Wang and Hoji that drives the narrative forward revealing the odd twist along the way. This game is set before the first Shadow Warrior and as such acts as a bit of an ‘origin story.’ A phrase Wang himself would commend as he has a fixation for comic books, and we even get to see his very own super hero man cave in the second level. 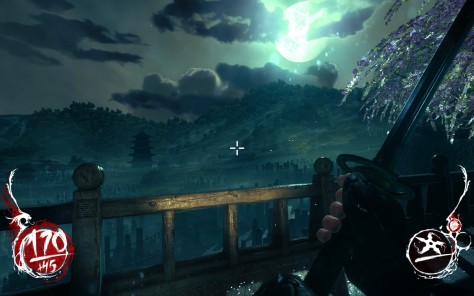 Lo Wang’s quipping, Demon de-limbing and fast paced explosive action are all firmly entrenched in the 90’s, when Carmageddon was the number one racing game not Forza, and no one had yet cottoned onto the fact that Mortal Kombat’s combat was flawed. A game only had to be violent with lashings of blood and humour in order to be become a cult classic.  However Flying Wild Hog have also managed to make Lo Wang relevant again, avoiding the pitfalls that trapped Duke Nukem Forever, and by making a game that is as humorous, tactical and challenging as it is mindlessly violent. Flying Wild Hog have been so successful in updating Shadow Warrior that it’s almost difficult to call it mindlessly violent now.

Shadow Warrior is an experience more gamers should Wang off too. The perfectly judged learning curve, excellent graphics, constant unveiling of weapons and abilities mean that you won’t get bored during the 16 hours it will take you to finish the game. Here’s hoping Flying Wild Hog get the opportunity to update some more classic franchises such as Redneck Rampage.