The first Bioshock was probably one of the finest first person shooters of all time.

On it’s surface, it’s a pretty basic corridor shooter set in the decaying post revolution under water world of Rapture. If you dive a little deeper though the action mechanic of the game becomes a lot more complex. Along with the usual line up of weapons, players could equip their character with Plasmids, a sort of steam punk science fiction equivalent to magic that allows players a wide range of powers including the ability to fire lightning bolts from your hands. It seems in Rapture all residents needed to do if they fancied having super powers was visit their local apothecary for a tonic and they were able to spit Bees out of their fists like McCauley Culkin’s worse nightmare.

Plasmids made combat within the game incredibly varied so Bioshock became an instant favourite amongst many gamers. There were a few who felt that the limited amount of exploration detracted from the experience and as a result Irrational provided just a Polaroid of Bioshock’s game world Rapture.

Irrational didn’t seem to be content with providing just a snapshot, and Ken Levine felt that he and his team could do better.  So he set about creating Bioshock Infinite. For the third game in the franchise (Irrational didn’t work on Bioshock 2, instead developer duties for that fell to 2K Marin who did a worthy job), players wouldn’t be returning to the world of Rapture, instead Levine decided to base Infinite in the same location as his aspirations and that was in the clouds.

Bioshock Infinite is based in Columbia, a floating city built by a self-proclaimed prophet called Comstock. The flying paradise was created as a way of extolling the virtues and beliefs of the American people upon the world. Unfortunately, the Utopia is far from perfect and elitism and racism are rife amongst the population of Columbia. Just as Rapture fell to the greed and flawed ideals of a genius madman, Columbia also falls into a civil war.

In the first Bioshock when players arrived at Rapture the city had already been destroyed. Artefacts had been left around the city such as voice recordings and museums that players could see and listen to in order to gain a sense of what a great place it could have been. This made the whole locale even more realistic, and even spookier. Like a ghost town.

In Bioshock Infinite players are placed into the role of ex pinkerton Booker De-Witt who is tasked with going to Columbia and retrieving a young girl called Elizabeth. The game opens in a very similar way with players being rowed out to a lighthouse in order to travel to their destination. Where the games differ though is that when players arrive in Columbia, the city is yet to crumble into disarray. Players arrive just in time to see the powder keg of oppressed layers of society explode tearing the city from the sky.

Unfortunately this removes some of the magic from the location. In our opinion setting the game out in the open in the clouds was also something of a mistake. The lofty, huge open skies of Columbia lacks the terrifying claustrophobic atmosphere of Rapture.

One of Levine’s aim with Infinite was to open levels up more and allow for more exploration. He has been successful in doing this but there still isn’t the level of exploration that you would find with more RPG focused titles such as Skyrim.

Booker also has the skyhook added to his armoury. This can be used to bludgeon enemies to death in a particularly brutal display, or it can be used to traverse the many Sky rails In the game. Sky rails are littered around levels to help move cargo from place to place, however when Booker takes advantage of them he can quickly whisk around helping to alleviate some of the boredom from back tracking through levels. The Sky rails also help to speed up combat and give it an additional layer of strategy. 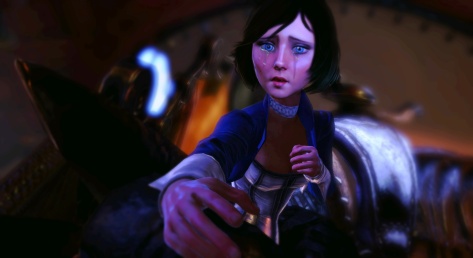 Its not just Booker’s new abilities spicing up the combat either. Elizabeth, the reason why Booker finds himself in Columbia, has the ability to open what the game refers to as ‘tears’. These are weak spots in the fabric of reality that allow Elizabeth to bring through items from other dimensions.

In a combat situation players may find themselves pinned down, however there may be several tears around that Elizabeth can utilise.  One may bring in extra cover for Booker to hide behind, a cache of powerful weapons that could be used to bombard enemies with or it could be a security bot which will ally with Booker and deal death on his foes from above.

As a result Levin and his team at Irrational really have blown open the world of Columbia and made combat a lot more interesting. There are still the weird psychokinetic powers that Booker can attain and level up during his travels. However these are no longer the gene splicing plasmids of old. In Infinite, these powers are called Vigours.

Infinite’s plot is also just as strong as the first Bioshock. At the outset, it does appear like the story is a bit of a rambling existential postmodern mess. As the game progresses though, it becomes very clear that Levine and his team know exactly where the plot is going and are experimenting with videogame narrative in a way few other developers have. Without wanting to give too much away, there was a show down with a spirit in a graveyard that was both terrifying and heart rendering in equal measure.

Even with the strong plot, improved combat and increased exploration, Infinite didn’t feel as strong as the original. It wasn’t because we felt jaded with the series, which is often a problem that the third title in a series will find. There were more than enough new ideas and fresh spins for Infinite to feel more like a cousin than a brother to the original Bioshock. Perhaps, the problem was that while each new addition to Infinite was a positive one, there were maybe too many. 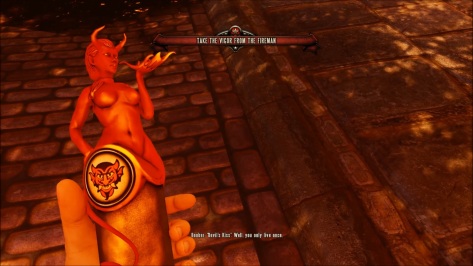 What made Bioshock such a unique experience was the setting. With a terrifying world acting as the stage to the compelling and twisty narrative, the linear progression within levels wasn’t truly apparent. The moral choices that players were forced to make when dealing with the fate of the Little Sisters was also fantastic. Would you free the little girls from their slavery from collecting ADAM or would you kill them for their ADAM thus allowing you to level up your abilities quicker.

As such, it feels like Irrational have over egged their pudding with Infinite. And whilst there have been so many technical improvements, a little of the original title’s soul is missing.

Allowing player’s to use their imagination and wonder what Rapture would have been like before it had been destroyed was fantastic, and its not often that games actually allow players to engage their imagination. The original Star Wars trilogy was brilliant because it hinted to a civil war that viewers had to imagine and the aesthetics of the space ships and technology gave the film the look of a ‘used universe.’ The ridiculous story about a young boy joining a cult and following a weird hermit into space whilst falling in love with his sister was so much easier to believe when it was set against the backdrop of a huge space opera. The newer films, whilst they had improved visuals, were no longer grounded by any folklore and what was considered myth previously was made cold scientific fact. The magic had been removed.

Now, I’m not saying that Bioshock Infinite is as bad as the latest Star Wars films. However, by allowing players to see the decline of the Columbia and allowing for greater exploration, a little of the ‘Je Ne Sais Quoi’ has been removed in a bid to placate critics.

That’s not to say it’s a bad game. It is a thoroughly enjoyable title and one that, if you have not yet had the opportunity to play, you definitely should do so. The biggest benefit of the new locale in the series is that you won’t feel like you are missing out on anything by jumping straight in and playing the third game.