This week The Last Of Us fans were given a reason to be joyous. And when we say Last of Us fans that’s surely anyone who has played the apocalyptic adventure horror title from Naughty Dog. Following a leaked screenshot advertising The Last of Us coming to the PS4, Sony were forced to confirm that the game will indeed be coming to their newest console.

The Last Of Us Re-mastered edition will come with all DLC from the PS3 version including the prequel Left Behind that helps to fill in a few gaps in Ellie’s history. Along with the additional content the game will also feature graphical improvements thanks to the PS4’s impressive hardware. The Re-mastered edition of the game will run at 60fps as opposed to the PS3’s 30fps and will also run in 1080p.

A trailer showing one of the more touching moments in the game running on PS4 hardware has been released in order to show off the benefits of buying the game again. We would link it but are such massive fans we don’t want to run the risk of ruining any surprises and lessening the emotional impact for any players who are yet to experience this classic.

To be honest though, if you are yet to play The Last of Us but don’t own a PS3 or a PS4, even though we are yet to play the PS4 Remastered edition. As per our website title “Its Not Just Graphics”, we would argue that whilst it’s nice the game is getting a fresh coat of paint, the PS3’s graphical experience is certainly strong enough so why wait. You should run out and buy a PS3 and a copy of The Last Of Us now! There are numerous other PS3 exclusives that also warrant purchasing the Sony’s previous generation console.

Sony weren’t the only ones making next gen waves this week. Microsoft’s Xbox One has seen its price slashed down to just £350 by UK retailers. ASDA and Amazon have both discounted the Titanfall bundle, prior to this price cut Ebuyer and Overclockers UK, two British etailers, were selling the bundle for just £389 which was £10 cheaper than the Console’s RRP. Whilst the Xbox One’s sales figures certainly are nothing to scoff at they are trailing behind Sony at the moment so it is only natural for retailers to try and bring the price down in line with the more successful PS4 in the hope of shifting more units.

Nintendo fans also had plenty of excitement this week. Ubisoft have announced that Watch Dogs will be coming to Wii U in the Fall of 2014. This will be a huge relief to many Wii U owners as there have been persistent rumours claiming the game had been cancelled for Wii U. 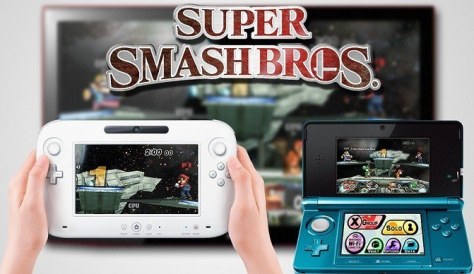 There was also a Nintendo Direct announcement highlighting loads of new information on characters, gameplay, and technical details for the 3DS and Wii U versions of upcoming brawler Super Smash Bros. The 3DS version will find it’s way into player’s systems this summer while the Wii U version will arrive slightly later this winter.

Some critics are already calling the late release date for the Wii U the final nail in the coffin for the struggling system. Unfortunately the internet seems to forget that the Wii U has high profile exclusive titles in the form of Bayonetta 2 and Mario Kart 8 to keep players interested in the mean time and while these negative comments certainly aren’t justified, they will certainly create a lot of traffic, incite a lot of negative discussion and just add to the unjustified storm of negativity currently pounding Nintendo.

This week was quite a heavy one for gaming announcements. Nintendo threw buckets of information at us with the latest Nintendo Direct.

Mario Kart 8 will be hovering onto the Wii U on May 30th and Bowsers minions, the Koopalings have all been announced as playable characters for the first time ever in a Mario Kart title. 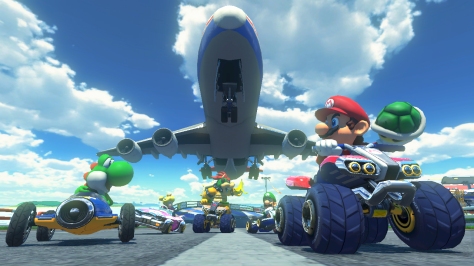 Little Mac was announced as a playable character for the upcoming Super Smash Bros. Whilst he lives up, or down to his name depending upon which way you look at it in terms of stature, Little Mac is able to deliver really powerful punches that send even Samus flying.

The game that joins two of the greatest super sleuths of all time finally got a release date. No, Mark Sloane and Jessica Fletcher haven’t got their own title, fans will just have to hold out for that one. But Professor Layton vs. Phoenix Wright finally got given a European release date of the 28th of March.

Gameboy Advance games are finally going to be finding their way onto the Wii U virtual console as well in the spring with Metroid Fusion, Mario & Luigi: Super Star Saga and Yoshi’s Island: Super Mario Advance 3 being the first titles to arrive.

Nintendo also dove straight into the free to play market with the announcement of Steel Diver, Sub Wars. We have been playing that quite a bit the past few days and you can see a review here .

In non-Nintendo news, The Evil Within was given a solid release date from Bethesda. We are very excited about this title as it is from Shinji Mikami the creator of Resident Evil. Resident Evil has gone through an identity crisis recently, morphing into an arcade shooter and losing the horrifying elements that gave the series the massive fan base it has seemingly deserted.

Early footage shows the main character running away from a chainsaw wielding mentalist. As he has no weapons he has to take to hiding in lockers a la metal gear solid. This cat and mouse gameplay should hopefully inject some fear and tension into the title and we can’t wait to get our hands on it when it arrives on the 29th of August. 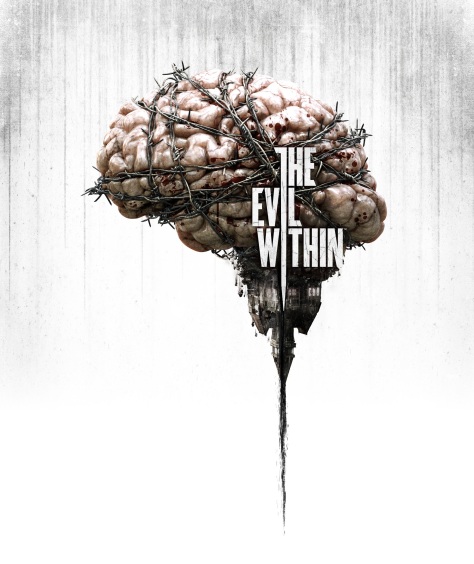 Capcom released a new trailer for Ultra Street Fighter 4 that shows off new character Poison. She joins the other newbies Elena, Hugo and Rolento. There is still one new character to be announced, which along with the six new stages this new update sounds like it will be worth the Ultra prefix.

Gearbox delivered a bout of bad news to Borderlands fans this week releasing a statement that said that Borderlands 3 is not currently in development. Borderlands 2 is such a large title though, we are sure there is still plenty of life left in the old girl yet, and besides, for the Borderlands uber fans Walking Dead developer Telltale games are working on a point and click adventure title that will fit into the series.

The Nintendo Direct announcement caused quite a stir last night amongst the Nintendo faithful. “What’s a Titanfall Beta?” Nintendo fans asked as they gathered around 3DS screens eager to hear Iwata’s hallowed words.

There certainly was a lot for Nintendo fans to be happy about. Hot on the heels of the new Sonic exclusives announced last week, Capcom also stated that Monster Hunter 4U would be coming to 3DS in Europe and a new trailer for Bayonetta 2 was shown in all of its eye melting beauty.

Nintendo paraded their own wares as well. Bowsers Minions are to be playable characters in Mario Kart 8 and Little Mac was added to the roster in upcoming Super Smash Bros.

To be honest though, the thing that I found most exciting about last nights announcement was Steel Diver: Sub Wars. Iwata didn’t do a terribly good job in selling it though, claiming that it was “contemplative” slow paced tactical FPS.

My favourite FPS’s and the ones I always flock to are those that are fast paced, with big explosions, colourful graphics a multitude of ridiculous weapons with names like BFG or Cerebral Bore. What Iwata seemed to be selling last night was Forsaken but with really bad lag.

As Steel Diver: Sub Wars is free though I though that I would give it a chance. This title marks Nintendo’s cautious toe dipping into the free to play market and as a first attempt it’s Admiral, sorry admirable. In single player mode the free version is limited to the first two levels, which are essentially tutorials and you can only choose one Submarine. The multiplayer mode is playable in its entirety though.

Due to Nintendo’s liberal amount of free content, Steel Diver feels more like an older Shareware game like Doom and Quake. Free to play titles nowadays tend to be so bloated with adverts it’s like playing an interactive infomercial.

How does Steel Diver play then? Well after playing through the first two missions of the single player (the only ones available in the free version,) it looks like it could be a really boring mess. The areas are lacking any detail to give them character. The radar only works for small periods of time so you constantly have to refresh it, which when combined with the sluggish controls make searching for that final enemy to kill a really boring chore. 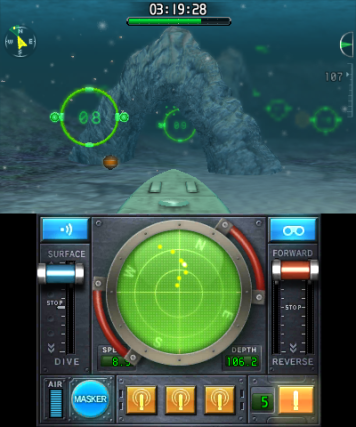 But, the things that make Steel Diver’s single player mode so dismally boring are the exact same elements that help to make the multiplayer a tense and enjoyable game.

It’s a simple Team Death match style of play where the Red team and the Blue team compete to eliminate one another. Like Counter Strike there’s no re-spawning, so if you die you are forced to watch the rest of the game play out. If you leave the game early you lose any experience gained. This isn’t as bad as it sounds because the camera angles are so cinematic and the torpedoes move so slowly that you find yourself cheering them on as they try to connect with their target in a sort of natural aquatic bullet time.

The cumbersome lever controls on the touch screen, along with the members of crew that pop up to keep you informed of imminent collisions and how many torpedoes you have make you feel like you are actually in command of a giant submarine. There’s a sense that your vessel is populated by a few hundred souls who have their faith that you are going to captain them to victory and make sure that they see their families again. 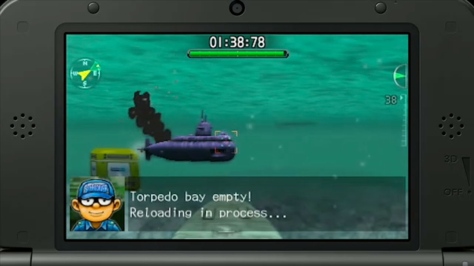 The most impressive thing that Nintendo have achieved with Steel Diver though is the perfection of team speak. Rather than listening to shrieking teenagers who seem to have no purpose in life other than to cause extreme irritation, much like genital warts, in Steel Diver gamers communicate through the use of Morse code, which is amusing, novel and helps add to the nautical theme of the title. It also takes a while to tap out messages so people only tend to communicate when they have something intelligent or really important to say.

Steel Diver is an incredibly addictive online hit that Nintendo should be able to capitalise upon by adding more submarines and modifications that people can purchase and carry more of their own presence into the virtual world. Currently you can purchase a single submarine for the price of just 89p or you can buy the full game which includes 18 subs, all of which are customisable, and you get the full single player mode for just £8.99.

Steel Diver should be a successful first step into the world of Free To Play for Nintendo and hopefully more companies will take note and adopt a more shareware style of distribution. Lets just hope that Nintendo’s next effort has a much better single player mode as well.