This week, much to the delight of Nintendo, SEGA announced two new Sonic titles that mark a reboot in the franchise. Nintendo were happy for two reasons, the first was that both titles are Nintendo exclusives, one for the 3DS and one for the Wii U. The second reason is that after revealing the artwork for the game, the internet decided to give Nintendo a break, and like a swarm of hornets began buzzing about how rubbish the redesigned characters look. 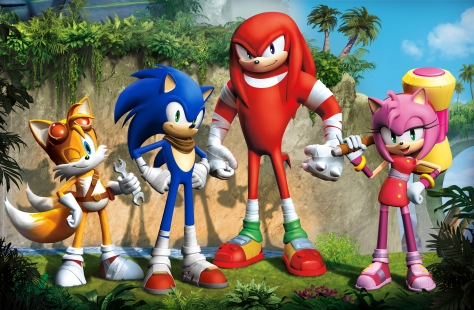 Sonic and chums now have slightly longer limbs, this was probably in an effort to make them look more humanoid and thus easier to relate too. Maybe it would have been easier for us to relate to a cartoon hedgehog who can run at the speed of sound if SEGA included a story line where Sonic had to take a job part time at McDonalds just to come up with his rent money. Knuckles also looks like he has spent quite a lot of time in the gym recently, while he and Sonic both have bandages wrapped around their arms like boxers. Maybe they have been training for appearances in the next Smash Bros? Maybe Marketing just thought it made them look like ‘cool urban boxer type tough guys’. Who Knows.

The Internet also claimed another victim this week in the form of Flappy Bird creator Dong Nguyen. The popular free to play title has had many gamers in uproar because they felt the pipes that featured in the title were ripped from the warp pipes in Super Mario. Well at least that’s what they claim, I have a sneaking suspicion that the keyboard warriors weren’t happy that one of their own was successful and able to move out of his mums basement. The gaming purists also probably weren’t chuffed about sharing there past time with a bunch of nonces who use iPhones either.  Nguyen decided to take Flappy Bird out of circulation in response to the wave of bile being projected towards him and as a result the title is no  longer available to download from the Apple app or Google Play store. Some legal analysts have stated this was a shrew move on Nguyen’s part as opposed to an emotional one as he would have no way of defending himself against legal proceedings from Nintendo should they pursue him in court.

Hideo Kojima was another game designer being forced to defend himself this week. Its been unveiled that the average completion time for the new Metal Gear Solid title, Ground Zeroes, will only take around 2 hours to complete. In my opinion this seems acceptable as the title is meant to serve as an introduction to Metal Gear Solid V: The Phantom Pain, which is to be launched later on this year. Ground Zeroes is also available for pre-order at £20 here in the UK which is about the price of a brand new Blu Ray. Considering about an hour and a half of Ground Zeroes will be cut scenes the pricing seems about right.

Activision have also announced that they will be switching the Call of Duty development cycle to three years as opposed to the standard two and thrown Sledgehammer Studios into the mix as a new developer. Activision have done this in response to critics who feel that the franchise is a little stretched out. Obviously increasing the production line and diluting the series even further is the best response to silence them.

Not wanting CoD to steal all of the headlines, Battlefield announced that there is to be a new police style spin off from the main Battlefield franchise. To be honest this sounds like a promising thing. Battlefield has always worked well with huge expansive levels allowing a player to feel like they are inhabiting a full-blown warzone. Maybe a SWAT style spin off could add a more enclosed, claustrophobic element to the game where players are forced to use quick reactions to clear buildings as opposed to just demolish them with a Fighter Jet.