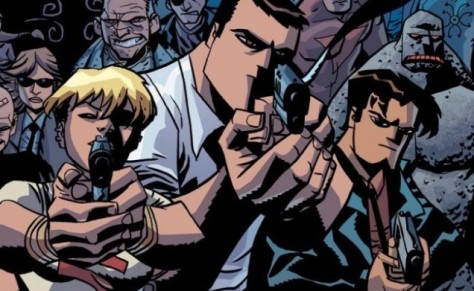 Last year Sony announced that Sony Pictures were working on exclusive tv content for the Playstation. It has been unclear up until now what kinds of content Playstation owners could expect but it was finally announced this week that the first show will be a drama called Powers.

The show is to be based on the police procedural graphic novel of the same title, which was written by Brain Michael Bendi and drawn by Michael Avon Oeming. There are to be ten episodes in total and we hope that it is successful, for while this content isn’t specifically related to videogaming, it is nice for providers to start creating content aimed directly at gamers. At the moment in terms of on demand titles there is very little mainstream content aimed at people who play games.

Steam this week also released the free to watch documentary called Free To Play. It follows the lives of three professional Dota 2 players in 2011, as they all compete for a $1 million prize. The documentary doesn’t focus too sharply on the details of DOTA and you don’t have to be an expert on the game in order to know what is going on. Instead the film uses the passion of each of the players to fill in any gaps, and each player’s backstory is just as intriguing as the competition itself. Free To Play also looks at the commercial success that eSports have seen in countries such as Korea and China as a result the documentary manages to explore many aspects of professional gaming which will appeal to a wide audience.

Sony and Steam aren’t the only ones providing custom made video content for their users. Microsoft have long been working on a large number of shows and  have even teamed up with Steven Spielberg who is producing a Halo series. A documentary series is also in the works that charts the legendary failure of the E.T. videogame by Atari.

E.T.’s sales were so bad in 1983 that according to urban legend Atari were forced to dispose of a huge number of the unsold cartridges by burying them in the desert.

Fuel Entertainment and LightBox Interactive who are making the documentary want to excavate Alamogordo landfill in New Mexico looking for the buried chache of retro games. Unfortunately their excavation permit was denied on Thursday this week due to concerns of toxic substances that may be unearthed if the dig were to go ahead.

It’s fantastic to see Sony, Steam and Microsoft forge ahead with creating custom tv content for their audiences. For too long there has been little to no games coverage on TV in the UK, so now with the advent of on demand viewing it looks like gamers are finally going to receive the content that they have been denied for so long. You never know we might get really lucky and Games Master might see a revival.