Oddworld: Stranger’s Wrath is a title I have wanted to play since its initial release as an Xbox exclusive in 2005. Unfortunately, it came out in the same year as FEAR, Call of Duty 2 and Quake 4, so my first person shooter thirsts were more than adequately quenched by a sea of future classics.

I then meant to download it on Steam for PC, but it always seemed to be  in the sales at the wrong time, lost amidst a digital dump of downloadable  treasures. Then I noticed it on the Playstation Store. “Wow”, I thought. “I could play it on my PS3 and enjoy it as it was originally intended on a console”. But, getting off of the sofa, locating my credit card and engaging in a long drawn out purchasing process without a keyboard and mouse seemed to be precisely the kind of hassle I intend to avoid when vegging out on the sofa  like a rotting corpse.

Then I saw that it was available for PSVita, so when I was given  some Playstation Store vouchers as a gift It seemed like the fates had aligned and I went ahead and purchased Stranger’s Wrath. Frustratingly, I wish I had bought it 9 years ago.

Oddworld Stranger’s Wrath on the PSVita feels like a vintage wine that has aged past it’s best, and instead of enjoying it at it’s flavourful peak, it must be used as a vinegary dressing for a salad. Time and the porting process have not been kind. Graphically it is OK, although the Vita’s incredible OLED screen does highlight a few jagged areas and muddy textures.

For those not familiar with the game, Oddworld: Stranger’s Wrath is the  fourth title released in the Oddworld Universe. It follows the exploits  of a bounty hunter called Stranger as he journeys through Oddworld trying to  earn enough money to fund an apparently life saving operation. Now I  must warn you that this review will contain spoilers, because it is impossible to give a reasonable critique without revealing a few plot elements. (Even then it’s impossible for me to offer a reasonable critique if we are painfully honest). So if you already have your mind made up and you are going to play this game or are already half way through maybe look away now, as I don’t want to ruin  some of the game’s remaining impact. 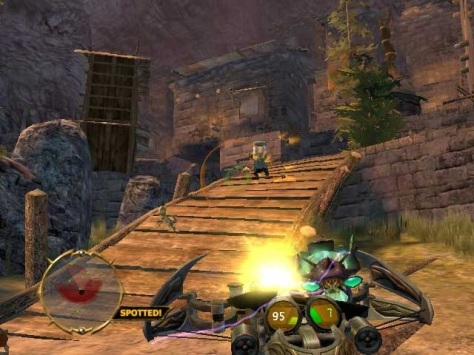 There are gameplay techniques from wide ranging genres such as stealth  titles, platformers and first person shooters. The action elements start off as great fun and the game’s weapons are ingenious. Stranger is armed with a crossbow that he can arm with a variety of critters, all with their own unique effects. These range from fast firing hornets, exploding bats,  electrified bugs and gaseous skunks.

Stranger, in typical bounty hunter fashion, must capture different criminals in a bid to gain more ‘Moolah,’ (the games equivalent to cash if you hadn’t  figured out the subtle naming.) Players receive more money for capturing outlaws alive so some of the Critters will only incapacitate targets as opposed to rendering them inert with a violent explosive death. This is a nice way of rewarding players for skillful play and will cajole a few into playing through levels in a stealth like fashion. Unfortunately, the rewards aren’t really big enough, and  the gameplay isn’t as addictive as titles like Hitman where it’s possible to get  sucked into replaying the same level in five different ways in an effort to achieve the best rating. It is possible to set traps for AI enemies by luring them under cranes before dropping huge shipping containers onto their heads, however these traps soon lose their appeal. Partly because it feels so staged and partly because the Critter that is used to entice enemies over to certain areas is so annoying, it’s a lot easier and just as much fun to run in, Boombat’s blazing. 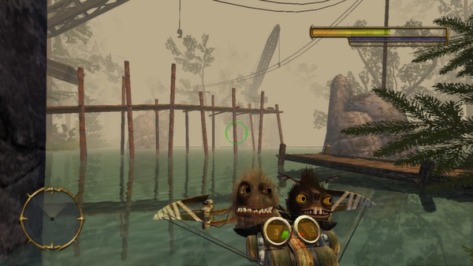 About two thirds of the way through the game we learn that Stranger isn’t actually the species that he claimed to be and is actually a Steef. Steef have been hunted pretty much to extinction because the evil villain Sekto offers a small fortune for their heads. This means that Stranger is forced to team up with an indigenous tribe called the Grubbs who have been displaced by Sekto to bottle their water supply and sell it as expensive mineral water. At this stage in the game Stranger no longer needs to capture criminals for cash, instead any enemy that he captures is used as ‘Critter food’, essentially allowing the Critters to breed and give players more ammunition. Upgrades are also handed out at the end of each section by the Grubbs as a way of thanking the Stranger for his effort. As a result, exploration becomes completely unrewarded with little point as there is nothing to spend cash on and the Critters continuously copulate providing an endless ammunition supply. 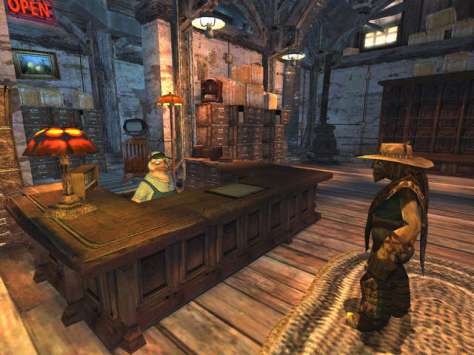 If Stranger’s Wrath was a film it would be a mixture of Chicken Run,  Serenity, Avatar and The Last of the Mohicans. While this description of the plot might seem faintly damning, the plot itself is actually the best part of the game, despite the negative impact it has on the gameplay. The overall themes of Industrilisation, Anti-Capitalism and Socialism that are present in all other Oddworld titles are all present here and despite there being a lack of Abe it’s obvious what universe Stranger’s Wrath takes place within. The humour at times does wear itself a little thin, especially when the sound-bites of The Chicken’s and the Grubb’s are concerned. After hearing the same phrase bleated out in the same annoying voice for the fifteenth time, you may find yourself searching for the nearest cushioned implement to stuff your ears.

The confused identity of Oddworld: Stranger’s Wrath is amplified in the PSVita version through the controls. At times, the touch screen controls are well implemented. To switch from 3rd person to 1st person perspective all you need do is double tap the touch screen. This makes engaging in combat after a platforming section feel seamless. However, there are other times when it seems like the developer just forgot about the touch screen altogether. The menu screens in the stores for instance are impossible to properly navigate and it doesn’t seem like you are actually able to scroll down through all of the items on the list.

Age has not been kind to Strangers Wrath;  gameplay features that were new and daring at the time of it’s initial release seem diluted and rather than being a game with plenty of well implemented and established ideas, there is just a sense of confusion. There still isn’t really a game like it that I can think of and had I played Stranger’s Wrath back in 2005, it may have felt like a more complete package,

Wrath is by no means a bad game and I wouldn’t want to dissuade anyone from playing it, but if you are going to, please do so after getting in a time machine and taking a trip back to 2005. If this isn’t possible (and I have a feeling it isn’t, I’ve probably just been watching too much Dr. Who again and not taken my medication). Then pick up a copy for the Xbox, it’s cheaper on eBay than on the Playstation Store and you will end up with a nice box to clutter your shelf with. If you are really lucky, it will have come from a smoke free environment and won’t make your lounge smell like an old video rental store.