It was with great excitement that I received my copy of Nintendo Force. This independent publication was set up to plug a gap in America left behind by the demise of Nintendo Power.

I have to be ashamedly honest here and admit to not realising that Nintendo Force existed until I stumbled across their Kick Starter campaign.

In the UK we still have the monthly publication of Official Nintendo Magazine. You can subscribe to this publication from anywhere in the world and apart from the odd piece of regional information regarding game’s release dates there really isn’t a lot to stop ONM from catering to the American Nintendo audience.

In fact, when you place NF next door to ONM there are immediate different levels of quality to the publications. The paper in ONM is more resilient and less likely to tear, and the front cover is a much nicer, glossier, and harder wearing paper than the cover of NF.

ONM is a lot more frequent as well, NF is bi-monthly whilst ONM is a monthly publication allowing it to provide you with information that is a little bit more up to date. However, in this day and age with the advent of the internet, I doubt most gamers rely upon Magazines as their source of gaming news. (We are pretty sure that most gamers use innovative, informative and entertaining news feeds such as Digestive Gaming Biscuit).

The team at Nintendo Force seem to realise that print has been usurped in up to date news by the internet. As a result, there are loads of really interesting articles that cover indie, retro and the latest games.

Because Nintendo Force are an independent magazine with a strong following, they obviously don’t have the restrictions that ONM have, especially when it comes to their covers. Looking at the back catalogue of cover’s that NF have run is a lot of fun. The issue that I received for January/February is Shovel Knight which isn’t just a massively creative and beautiful cover that continues around to the back of the magazine. It’s also pretty daring, there aren’t many Nintendo mag’s out there that would use an indie title that was funded by a kick starter campaign for their cover art. 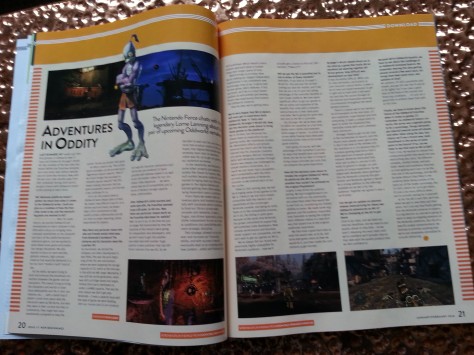 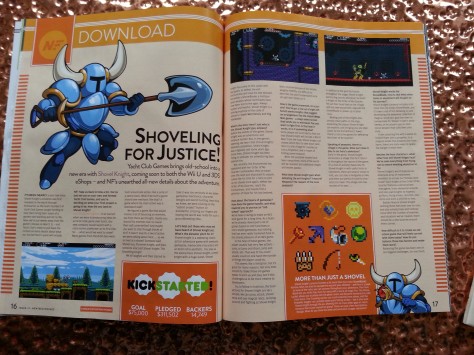 You may have seen the Nintendo Force site, and especially if you live in the UK wondered if it was actually worth subscribing too. I would say yes it is, even if you already subscribe to ONM, both magazines offer enough unique material to make them worthy of Nintendo fan’s coffee tables. NF have just offered up another 500 reduced rate subscriptions as well in celebration of Lucas’s brand new baby boy being born. As soon as I finish this post I will be going onto their website and signing up for a subscription.

If you are residing in the US though and you  are already enjoying everything Nintendo Force has to offer. I can also heartily recommend a subscription to Official Nintendo Magazine. Not many editor’s of Magazines are willing to be filmed in an ill fitted Pikmin onesie after all.